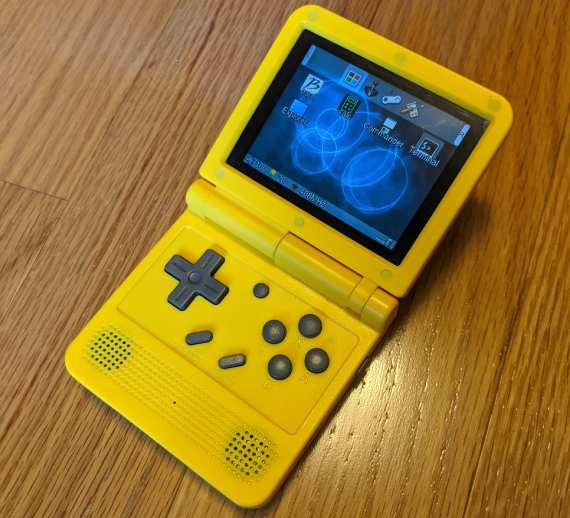 The PowKiddy V90 is an awesome little Linux-powered handheld gaming device. It's reminiscent of a Game Boy Advance SP, and it is capable of emulating most GBA games, in addition to many other consoles including NES, SNES, Genesis, and even some PS1 games!

I love mine, but it's not without it's flaws. The Miyoo custom firmware fixes many of it's issues, but it's inability to charge from a standard USB Type-C ports is a hardware bug. So, it's time to break out the multimeter, soldering iron, and USB-C specification!

Through ignorance, apathy, or cost-savings (probably some of all three), PowKiddy only connected the power and ground pins on the V90's USB-C port. This is good enough when charging from a USB-A port, because they always provide power. But, when charging from a USB-C port to a USB-C port, they first have to decide which side supplies the power. Since the V90 didn't connect the pins to perform this negotiation, it never happens.

I was vaguely aware that the negotiation could be done with resistors after reading about the Raspberry Pi 4 fiasco. (Short version: the spec calls for two resistors, the Pi 4 used one, it worked sometimes but not always.) Benson Leung has a good article that explained that situation and gave me a good head start on what I needed to do here. That led me to reading (part of) the actual USB Type-C Cable and Connector Specification, specifically Section 4.5.1.3.2 Sink Configuration Channel Functional Model and Table 4-25 Sink CC Termination (Rd) Requirements.

For a device that is only a sink (meaning it only takes power and never supplies power), and only needs 5 volts and no more than 3 amps (15 watts), the setup is fairly simple. The CC1 and CC2 pins each need to be pulled down (connected to ground) via 5.1 kΩ resistors. I happened to have some of these resistors that I got in a kit from ElectroDragon (600 resistors for $3, or $0.005 per resistor.)

Now I just needed to figure out which pins were CC1 and CC2. For that, I bought a couple of USB-C test/pass-through/break out boards off of Ali Express. On this particular adapter, the pins are mostly labeled by pin number rather than function, so CC1 is A5 and CC2 is B5. I figured it out the hard way, but it turns out it's also listed in the spec, in Table 3-4 USB Type-C Receptacle Interface Pin Assignments under Section 3.2.3 Pin Assignments and Descriptions 🤷‍♂️

I used the right one with a multi-meter to determine which pins on the V90 matched to CC1 and CC2, and I soldered resistors onto the left one to test my theory that all the V90 needed was a couple of resistors. The test results confirmed it - with the resistors soldered into the breakout board, I could charge from my 87W USB-C MacBook Pro charger! (Obviously not at 87 watts - the v90 only draws a maximum of ~3.5W when gaming and charging.)

In my case, the correct pins for CC1 and CC2 on the V90 were the leftmost and second-to-the-right "small" pins (the bigger pins on the outside edges are VCC and ground), but I won't guarantee that they are in the same order on your device.

Next came the fun part: actually soldering in the resistors. The connectors are tiny and my soldering skills are somewhat 💩.

Getting the resistors to stay put while I soldered them was a huge pain. I bent them, clipped them short, then used a helping hand tool to hold one, and another helping hand to hold a magnifying lense. In hindsight, maybe I should have kept them straight and taped them in place. Oh well.

I confirmed that the outer part of the USB-C plug was connected to ground, so I just soldered both of my resistors to that, rather than try to handle a second round of tiny pin soldering.

In the end, I accidentally shorted SBU1 to CC1 and SBU2 to CC2, but it didn't seem to cause any problems, so I left it. (The SBUx sideband pins are used for alt-modes like DisplayPort video, but not on this device.) I also accidentally shorted VCC to ground, but I fixed that one. 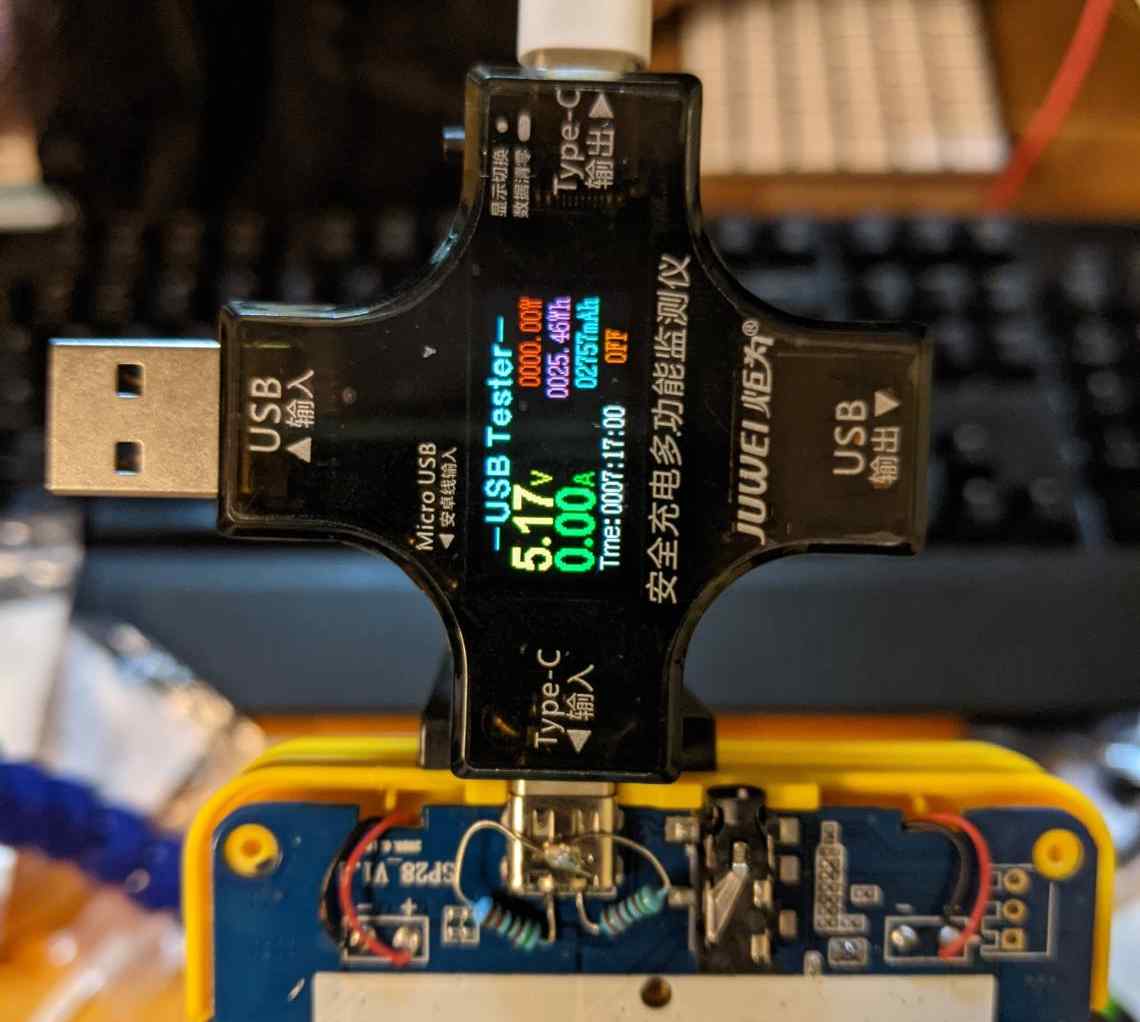 Testing with my Multifunctional USB Digital Tester confirmed that it could now negotiate to receive power from USB-C ports!

I haven't yet, but I'll probably put a blob of hot melt glue over the resistors to keep them from getting shook out of place.

Quick testing with my MacBook charger confirmed that I had done the job correctly, or, at least, correctly enough :D 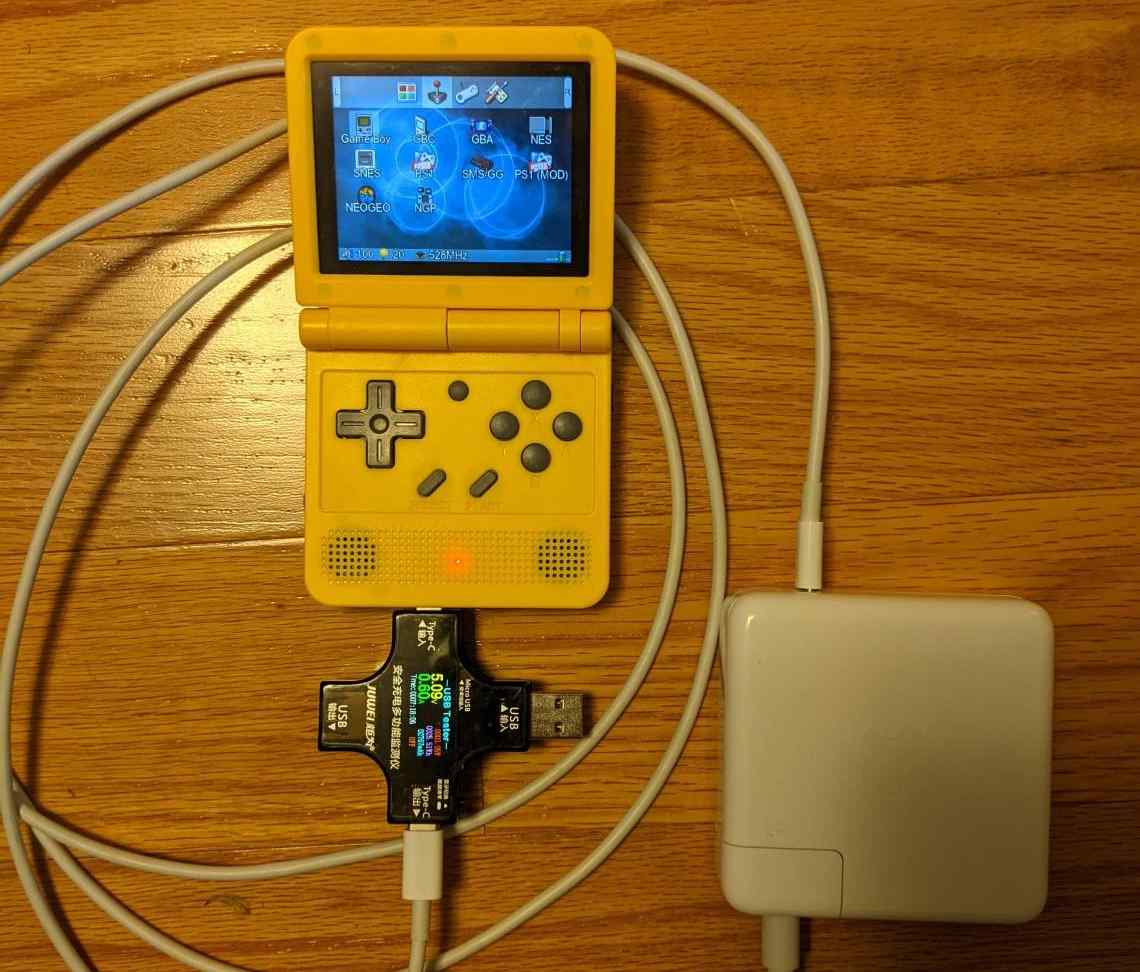 In summary, I'm happy that my V90 now works with any USB-C charger, but I really wish PowKiddy had just done this at the factory. I would have gladly paid the extra $0.01.

P.S. If you're reading this PowKiddy, please also connect the USB 2.0 Data pins - there's a controller built into the CPU, so you'd just need to run the traces which should be ~free.

And, finally, if we're going hog-wild, maybe add a sensor to detect when the lid is shut so that it could do something smart, like at least turn off the screen backlight. (I realize that the choice of an application processor that doesn't appear to have a sleep mode makes this less useful, but hey, you could always upgrade the processor too!)